Be advised that on 1 August 2017, Hawaii – Emergency Management Agency (HI-EMA) will expand the monthly siren test to include the Attack Warning Signal. This is the result of the possibility that the State of Hawaii may be within range of an intercontinental ballistic missile (ICBM) carrying a nuclear warhead launched from North Korea. This signal will follow the Attention Signal which is normally tested on the first working day of each month.

2-2.e.(2) Attack Warning Signal. A 3 to 5 minute wavering tone on sirens or a series of short blasts on horns or other devices. The Attack Warning signal means detection of an actual attack or accidental missile launch. Take protective action immediately. The Attack Warning will be repeated as often as deemed necessary by local government authorities to obtain the required response by the population, including taking protective action related to the arrival of fallout. This signal will have no other meaning and will be used for no other purpose.

You can download a new PDF document titled “Guidance Summary for Coordinated Public Messaging – Nuclear Detonation“ from the HI-EMA website at http://dod.hawaii.gov/hiema/ 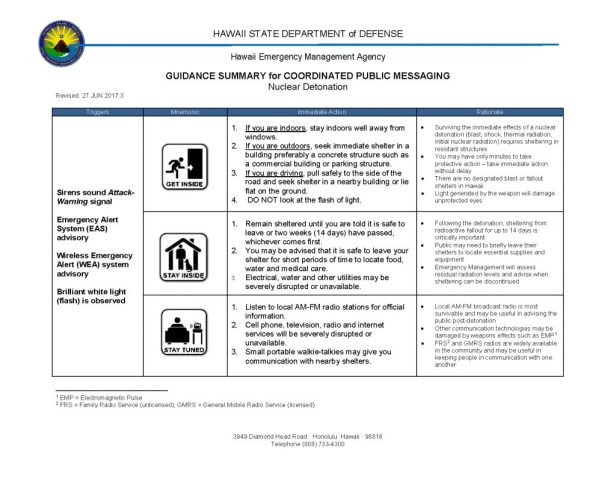